General body is the supreme body of BJUP that takes major policy decisions for the organization. It comprises of 18 male and female members that have strong willpower of social work. This body is empowered & guided by the bye-laws of the organization for undertaking important decisions like the selection of executive body members, appointments of legal bodies and auditors etc. Any alteration and amendment in the bye-laws and acts of the organization will be a matter of the jurisdiction of this body. Every budget and details of expenses are authorized to be passed in the meetings of the general body and will be executed after adaptation in the general body.

BJUP’s executive body comprises of 07 members who function for the advancement of the organization between the two annual general body meetings. The roles and responsibilities of this body are very crucial for the planning, executions of programs & administrative decision making for the progress of the organization. As per the mandate, the executive body meets in every three months. The present members of the executive committee are as follows:

Organizational hierarchy details are mentioned below which is a setup of functional and effective management in the execution of programs. It also defines the clear-cut roles & responsibilities and accountabilities. 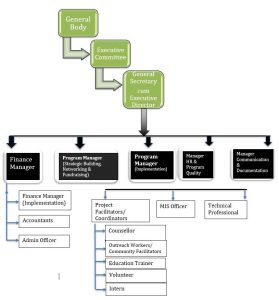