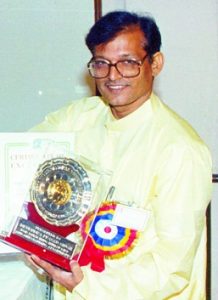 Nalanda, the prime face of Bihar has a recognised face of education that taught the world the postulation of Vedas, logic, grammar, medicine, metaphysics, prose composition and rhetoric. The pious land of Lord Buddha and Lord Mahavira provided many generations with a better life.

Late Mr Devendra Prasad Singh was one such personality who made others lives worth celebrating. He was a great social volunteer who contributed to the development and upliftment of the socio-economic status of the vulnerable and bereft community of the society. He was born in Ghosrawan village of Giriyak block in Nalanda district on Dec 19, 1956. Being the eldest of all the children of Late. Shri Natho Singh, a freedom fighter, received education at a village government school. With the experience that he gathered by being politically, socially active he was self-motivated and envisioned that “there should be an equity-based society devoid of any exploitation on the ground of sex, race, caste, creed, class & religion”.

He was a true social worker who sacrificed his comfort space for social service at a very young age. Mr Singh was committed to the development of the poor, deprived, marginalized sections of society. In the year 1983 Mr Singh came up with an idea to establish a forum with the support of other like-minded people and as a result, ‘Bhartiya Jan Utthan Parishad’ was formed and was registered on 13th August 1986 as an organization.

The objective behind the formation of the organization was to work flawlessly for the holistic development of socially excluded, marginalized and poor sections of the society. Late Mr Devendra Prasad Singh was ahead of his time, and he believed that until and unless the holistic development approach is not followed the development process are in vain. He believed that people are mostly agriculturists and renovation of AAHAR, PYNE must be accomplished. The idea behind was, that it not only ensures the regular supply of water agricultural activities but also create employment at the local level. He was appointed in a reputed position and awarded for Excellencies as follows:

Mr Singh was nominated as Director for Nalanda Gramin Bank for a period of seven-year (1984-1991).

* “The Global March Award” was awarded by Mr Kailash Satyarthi, International Coordinator, Global March against child labour in the year 1998.

* BJUP was awarded for best performance in the field of “Communal Harmony”, “Rajgir Mahotsav” and “Social Service” by the District Magistrate, Nalanda, all under his guidance and suggestions.

* “Gem of India Award-2000 and Achiever of the Millennium Award-2000 was awarded by All India Achievers Conference, New Delhi ‘In recognition of his outstanding services to society and excellence in his chosen field of activity.

* He was appointed as Secretary- District Literacy Committee- Nalanda for a period from July 1998 to July 2000.

* “Satish Chandra Environment Award” was awarded in the year 2001 by Gram Niyojan Kendra, Ghaziabad after his sad posthumous.

Late Mr Devendra Prasad Singh received all awards for his exemplary contribution in the social development sector, which reflects his passion, hard work, self-motivation, interest, willpower and confidence to work to bring positive change in society. He was a father figure to those who were taking new initiatives in the social development sector. His aura and presence cannot be measured in the boundaries; he was courageous enough to undertake any initiatives for social service and development flawlessly. Late Devendra Prasad Singh has been dedicated to society till his last breath. He has been Murdered by Criminals while returning from DM Residence from a Literacy programme on 26 July 2000 at evening 7 O’clock. Every year, on his death anniversary, we the BJUP family organize a congregation to revisit his exemplary ideologies to fulfil his aim of spreading and bringing positivity to society.

The establishment of Bhartiya Jan Utthan Parishad is the result of constant efforts and strain of Late. Shri Devendra Prasad Singh, the man who sacrificed his life for the social cause, set up an ideology to put the community on the priority and serve them with the best. He provides us with the path which gives us immense power and blessing to work for the best and serve for the vulnerable and the marginalized section of society. We thank him for showing us the path which leads to sustainable social development.