Your struggles, Our support 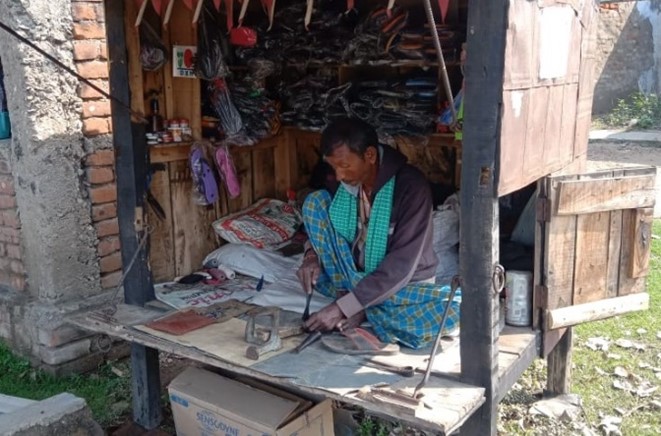 Hardia Sector B is one of the nine villages of Hardia Panchayat of Rajauli block of Nawada district of Bihar. It was settled under the displacement scheme of the Government of Bihar in 1985 at a distance of about 3 km from Rajauli market. It is a village of 1232 population being settled near National Highway 31, consisting of 295 males, 297 females and 640 children and adolescents. Electricity, schools, Anganwadi etc. are available in the village. More than half of the population from this village depend on mica picking and maintaining their families with others like wages, small shops, drivers, cattle rearing etc.

Due to displacement, these villagers do not have farms, due to which they have to depend on other businesses. Due to inadequate employment opportunities, people have to face financial and mental troubles. There is a government hospital in Rajauli for health-related services, but due to a lack of doctors, people are deprived of proper health facilities. People treated for serious diseases have to travel to big cities. In getting treatment out of this village, the expenses make a bad situation for the family’s financial situation.

One amongst the residents of this village, Moti Ravidas, who is around 50 years old and works for the maintenance of his family by doing repair work of shoes and slippers. He has 7 children, out of which 5 are married and 2 were studying. All the expenses of the family are on the shoulders of Moti Ravidas, everything was going well. But their youngest daughter was detected with a kidney problem, which is currently being treated by AIIMS Hospital in Ranchi. For the treatment of the girl, he put all his earnings, which made his financial situation very bad. He had to lend money for the treatment process, which incurred a big debt situation against him.

Moti Ravidas has utilized the provided amount in a better way which has let his shop grow. On the one hand, where is prosperously growing his shop, he is also trying to cope with the debt he has borrowed from his relatives for her daughter’s treatment.

Under the Community Empowerment Project, the organization is doing similar work to promote self-employment in 10 villages of Rajauli block and it is hoped that soon the economic condition of the people will improve.

Moti Ravidas: “I have taken help from all my friends and relatives, cannot ask for more from them, I am very thankful to the organization who helped me during this trouble so that I can run my shop again.”